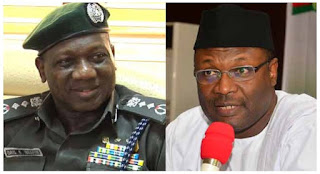 The leadership of the Peoples Democratic Party (PDP) has called on the Inspector General of Police, Mr Ibrahim Idris, to resign ahead of the general elections in 2019.

The party also asked the Chairman of the Independent National Electoral Commission (INEC), Professor Mahmood Yakubu, to resign his position.

PDP National Chairman, Mr Uche Secondus, made the call while addressing the National Executive Committee (NEC) meeting of the party at its National Secretariat in Abuja.

With 78 days to the polls, the PDP chairman accused the police boss of working for the incumbent to arrest and intimidate its opponents.
He also alleged that the INEC chairman lacked the will and capacity to deliver free and fair elections next year.

The NEC meeting of the PDP is the first since the party’s convention held in Port Harcourt, the Rivers State capital where former Vice President Atiku Abubakar emerged as the party’s presidential candidate.