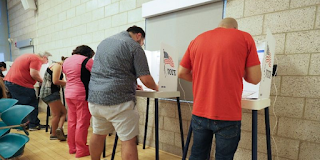 Polls opened Tuesday across eastern US states as Americans began casting ballots in the critical midterm elections that mark the first major voter test of Donald Trump’s presidency, with control of Congress in the balance.
States including Maine, New Hampshire, New Jersey, New York and Virginia opened voting stations at 6:00 am (1100 GMT), with Trump’s Republicans keenly aware that losing their majority will hamstring his political agenda over the next two years.
At stake are all 435 seats in the House of Representatives, 35 seats in the 100-member Senate, 36 governors’ posts and seats in state legislatures across the country.