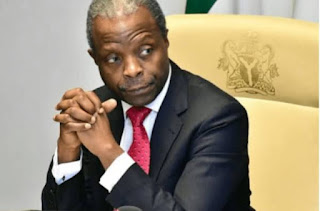 The Peoples Democratic Party (PDP) charges Vice President Yemi Osinbajo to stop sermonizing and parading like a saint until he answers to the N33 billion corruption allegation as exposed by the House of Representatives.

The party said the Vice President owes it as a personal moral burden, both as a preacher and Professor of law, to directly explain how the fund meant for the wellbeing of Nigerians suffering in the Northeast, was mismanaged under his supervision, instead of the lame attempts to dismiss the allegation and divert public attention from the scandal.

Nigerians were thoroughly appalled to learn, from the House of Representatives, how Prof. Osinbajo, as Acting President, in June 2017, unilaterally pulled N5.8 billion, from the Consolidated Revenue Fund of the Federation, purportedly for emergency intervention on food in the North East, which has now turned scandalous.

Prof. Osinbajo should explain how, according to findings by the House of Representatives, all the six states of the Northeast failed to receive the emergency intervention for food security, for which a major part of the money was claimed to have been expended, under his direct supervision as Chairman of Board of the National Emergency Management Agency (NEMA).

See also  2019 presidency: I did not endorse Atiku — OYEDEPO

What has Prof. Osinbajo to say on the revelation at the public hearing conducted by the House of Representatives that there was no evidence the World Food Programme (WFP) received the 5000 metric tons of rice, which NEMA claimed to have bought and donated to WFP for distribution to victims of insurgency in the region?

What has our Vice President to say to the report indicating that four of the companies that supplied food items to the region financed their projects through N2bn they each received as loan from the Central Bank of Nigeria (CBN)?

What is his answer to the huge allegations in the public domain that bulk of the money meant for suffering Nigerians in the Northeast was diverted to private pockets of key All Progressives Congress (APC) and the Presidency cabal to finance their wasteful lifestyle?

If Prof. Osinbajo had no ulterior intentions, why did he pull the money from the Consolidated Revenue Fund of the Federation without recourse to the statutory appropriation of the National Assembly?

The PDP holds that the action of the Vice President in unilaterally approving the release of the money to NEMA, where he also presides as the Chairman of Board is completely self-serving and ostensibly conceived and executed in corrupt intentions.

Instead of answering to the allegation, Prof. Osinbajo is employing rhetoric to divert attention, claiming that his actions are covered by his apparent abuse of Section 43 of the Procurement Act.

We invite the Vice President to note that Section 43 of the Procurement Act deals with the emergency duties of a procuring entity and  not the processes of drawing funds from the Consolidated Revenue Fund of the Federation which is covered by the Constitution. As such, there is no way he can justify his actions under any of our laws.

The Vice President should therefore advice himself properly by responding to the huge corruption questions and stop his unnecessary posturing.

Governor Sani Bello And Other Eminent Personalities Present At A Book Launch In Honour Of Col. Sani Bello

I Will Not Be Intimidated Over My Senate Election – Gov Ortom